After the important adventure in Cincinnati, which ended only after the entry of the franchise in MLS, and an adventure in Colorado in USL, coach Alan Koch has decided to restart from the Canadian Premier League taking the reins of the FC Edmonton, the former NASL team that in  first two seasons of the canadian top league has suffered and not a little.

A sort of return to origins for Alan Koch, a career as a footballer interrupted very soon and a past as a coach in the university and women’s leagues spent between the US and Canada, where he had also his first approaches with the men’s leagues. We interviewed him about his career, the end of his relationship with Cincinnati and his current challenge.

Edmonton is the oldest team in Canadian Premier League. In first two seasons it has encountered certain difficulties and the fans will surely want to redeem themselves. What is the approach you want to share with your roster?

We are one of the few teams in Canada that have a history. We want to embrace that history, but also evolve as a club and as a team to have success in the CPL. We are building a team that we hope can challenge to win already in 2021.

What prompted you to accept this challenge?

I wanted to be back in Canada. Edmonton is an excellent challenge as it allows us to be close to familiy, but also hel turn the fortunes of a club around. I want to be part of the evolution of the game in Canada.

Over the course of your career you have coached in Canada, both at a female and university level. How do you think the Canadian football movement has grown?

When I started coaching in Canada there were some options available to male and female players in the game, but now there are more. The game continues to grow, but we still have a long way to go. The success of individual player like Alphonso Davies on a globale scale will help significantly.

Edmonton is massively intervening in the market. What players would you
like to have?

We want hungry players that have a chip on ther shoulder and want to come represent Edmonton and FCE. Reaching collective and individual goals is part of our platform.

Are you looking with interest at the various Italian championships? Do you think that a joint venture could be created with some Italian team?

I have always watched and respected italian football. We can all learn from each other. So an exchange or affiliation with an italian club would be welcomed. 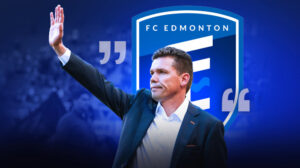 Let’s talk about your career. You left South Africa and then went to Germany and Ireland. What memories do you have?

Footbal has taken me around the worlld and I am grateful for the opportunities I have received. My biggest memories revolve around seiing the smiles on peoples faces. There is no greater feeling than making and seeing people happy.

How did you become a college coach in the United States? What did he teach you?

United States provides a lot of different playing and coaching pathways. I ha a succesful playing career in the college game and wanted to get involve in the coaching side of the game. Thankfully I have been able to be a college coach both in Canada and US.

Do you think university soccer can still give important support to the major leagues?

Yes, every year there are players that go from NCAA and make an impact in MLS. The same is now happening in CPL with USPORTS. I am a big supporter of the progression from the University Game to the pro level. There is no one way to become a professional footballer. There are many paths.

Let’s talk about Cincinnati. You have lived both the period in USL and in MLS. What was the difference between the two experiences?

In the USL I was able to have more of an impact on the design of the team and knew everyone personally in the club. In the expedited transition to MLS, there were many people who wanted to different things. The club had to grow incredibly quickly in a short amount of time and lost a loto of the soul that was already in place. The Club still struggles today, but I hope that they are able to turn the corner soon.

South Africa is one of the most economically developed countries on the African continent and football is a very popular sport. Could a league ike the MLS or the Japan League be born, where European or South American players can give their contribution to the growth of the movement?

The Sout African league has progressed and evolved, but could be so much better. Infrastructures and coaching are the biggest areas of need. There is so much untapped talent that is thirtsy to be developed. With the right people in the right positions the upward tajectory could be accelerated.

A last question. In your opinion, what is missing from an African national team to win a World Cup?

The same thing that prevents every other team from winning the World Cup. Everything has to come together at the right time. You need talented players, the right coac, a supportive federation, and then a unified and talented group that will run through a brick wall for their team and country. Hopefully it will happen soon, and of cours I hope that country is South Africa.

The editorial team would like to thank Jessica Rogers of FC Edmonton’s front office for helping with the interview.